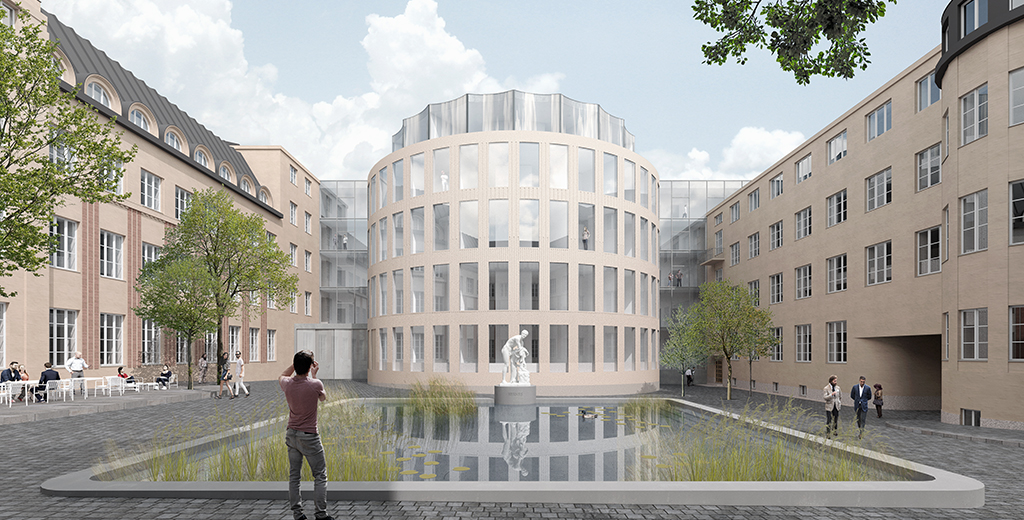 Futudesign Oy has won the architecture competition organised by real estate investment company Exilion, the City of Helsinki and the Finnish Heritage Agency. According to the jury, the winning entry “Hermes” pays tribute to the architectural and historic values of the premises in a modern way. Honourable mention was awarded to “Zikkurat” by Arkkitehtityöhuone Artto Palo Rossi Tikka Architects.

The facilities, which up till now have served as the head office of the Finnish railway company VR, will be renovated by Exilion and Scandic Hotels Oy to become a hotel. The architecture competition for the new part of the building, organised by Exilion, the City of Helsinki and the Finnish Heritage Agency, invited entries from five Finnish firms known for their outstanding quality: Arkkitehtityöhuone Artto Palo Rossi Tikka Architects, K2S Architects Ltd, Heikkinen-Komonen Architects, JKMM Architects and Futudesign Oy.

“The aim of the competition was to find a comprehensive solution that would complement the area with significant historic value. Futudesign’s entry was found particularly successful in its high regard for the surrounding environment. “Hermes” borrows from the historic themes of the Station while giving them a modern interpretation,” says Ari Talja, Chair of the jury and CEO of Exilion.

Project is proceeding on schedule

The new hotel building will transfer the dignity and refined details of the Station’s façade to the edges of Kaisaniemi Park. The extension will also create a new square in Kaisankuja north of the Station. Platforms for trains running to and from the airport will be located in the immediate vicinity of the square, and the future Baana tunnel will add to the number of people in the area. The plan includes spaces open to the public located on the ground floor of the extension.

“We wanted to blur the boundaries between new and old architecture and to create a stylistic symbiosis. By interpreting Eliel Saarinen’s architecture boldly from a totally new perspective, we hoped to create modern architecture in a genuinely new kind of way, which makes both the old and the new elements interesting. The plan honours the logic of the original Station: for example, the layout of the new building follows Eliel Saarinen’s principle of an indented façade and leaves the ends of the original building in plain sight,” Futudesign Oy’s Auvo Lindroos explains.

The new construction will house 120 rooms with a total surface area of approximately 4,000 m². The entire development will have approximately 27,000 m² and 500 rooms. Once completed, it will be one of the largest hotels in Finland.

“This is one of the most demanding restoration projects in Finland, but so far everything is going according to schedule. Plans concerning the renovation of the old building are well under way, and once VR vacates the premises next spring, we are ready to start. We estimate that the hotel will open in 2020,” Talja says.

In addition to the Helsinki Central Railway Station project, Exilion is developing the Tripla hotel complex in Pasila.

Minutes of the Jury’s deliberations >